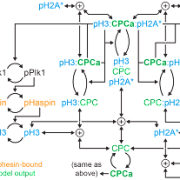 Aneuploidy arising from defective chromosome segregation is pervasive among nearly all solid tumors. In TP53-mutant breast cancer, the dysregulation of core mitotic transcription factors generates error-prone chromosome segregation by the scattershot upregulation of genes tied to kinetochore functions. Many of the dysregulated genes participate in a spatially-regulated positive-feedback network that controls the spindle-assembly checkpoint and kinetochore-microtubule attachments.  At the heart of this network is the chromosome passenger complex (CPC)—comprised of Aurora B kinase (AURKB), INCENP, Survivin (BIRC5), and Borealin (CDCA8)—that accumulates at the inner centromere to control mitotic events. Our team discovered that the CPC phase separates upon reaching a critical concentration during mitosis, creating a dynamic subcompartment with specialized functions. How the phase-separated CPC adapts to the unbalancing effect of mitotic transcription factor dysregulation is unknown. The hypothesis of Project 1 is that phase-separated CPC acts as a “phenotypic capacitor” during mitosis by buffering small-to-moderate imbalances (storage) and unleashing dramatic rearrangements when a systems-level threshold is reached (discharge). We will test this hypothesis using biochemical reaction-diffusion models of spatially regulated CPC phase separation, which will be tailored to primary mammary organoids derived from a mosaic GEMM of triple-negative mammary cancer and extended to clinical samples through standard diagnostic assays. The specific aims are to 1) develop and validate a spatial systems model of CPC recruitment that isolates phase separation and predicts critical network imbalances in cancer-predisposed mammary organoids; 2) test the instability-generating potential of critical network imbalances by quantitatively perturbing triple-negative mammary premalignancies in vivo; and 3) leverage routine clinical diagnostics to predict druggable chromosomal instability signatures in any primary breast cancer. Patient-specific, systems-level models of aneuploidy susceptibility will nominate kinase inhibitors in the network that are predicted to shift cells from robust to fragile states of segregation fidelity. 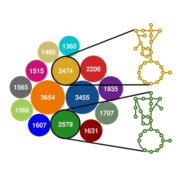 Mutant KRAS is a potent oncogene that drives proliferation and adaptive cell-state changes in multiple cancer types. One direct consequence of active KRAS signaling is fragmentation of the normal mitochondrial network with concomitant decreases in oxidative phosphorylation and mitochondrial membrane potential. The impact of this organelle stress is unclear in colorectal cancer, where KRAS mutations are acquired late in the disease and only in about one-third of cases. Primary tumors develop amidst short-chain fatty acids (SCFAs) and other metabolites uniquely produced by the gut flora, creating carbon sources that may impact how mid-stage colorectal cancers (CRC) adapt to an acquired KRAS mutation. Non-obvious mechanisms exist at the systems level that may cause an even greater metabolic impairment than generic decreases in oxidative phosphorylation or mitochondrial membrane potential. The hypothesis of Project 2 is that mitochondrial fragmentation causes hyper-compartmentalization of key low-abundance metabolic enzymes that constrains how primary tumors evolve in the presence of SCFAs and colonize the liver where metabolic inputs are very different. The specific aims are to 1) curate a metabolic model of human CRC cells that incorporates the system-wide impact of mitochondrial fragmentation and the availability of microbe-derived SCFAs; 2) instantiate metabolic models of CRC with data characterizing in vivo metabolic states to assess impacts of gut microbiota metabolism and mitochondrial fragmentation; and 3) evaluate the impact of metabolic adaptations to mitochondrial organelle stress on CRC colonization and growth as liver metastases. Metabolic circuits isolated by mitochondrial fission could give rise to tumor cell biochemistry that is very different from the universal roadmap assumed in most standard genome-wide metabolic network reconstructions. 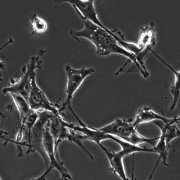 Receptor tyrosine kinases (RTKs) such as EGFR drive oncogenic RAS (HRAS, NRAS, KRAS) signaling and are widely amplified in glioblastoma, but these brain cancers are interestingly incapable of tolerating unbridled signaling from mutant RAS. Forced RAS hyperactivity causes excessive vacuolization and macropinocytosis, giving rise to a “death by drinking” phenotype termed methuosis. This phenotype is not unique to glioblastoma, suggesting a general stress on endomembranes and plasma-membrane internalization when RAS is chronically hyperactivated in an unbalanced fashion. Since EGFR activates RAS along with membrane-dependent AKT (AKT1, AKT2, AKT3) signaling, it implies that EGFR-amplified cells must identify strategies to ameliorate membrane stress during glioblastomagenesis. The hypothesis of Project 3 is that glioblastomas rebalance RAS activity by altering intracellular traffic of EGFR itself and location-dependent signaling of the protein tyrosine phosphatase SHP2. Glioblastomas are known to acquire vIII deletions in EGFR that render it deficient in internalization and endolysosomal degradation. SHP2 (PTPN11) is capable of transmitting RAS-activating signals between internalized EGFR and the plasma membrane, but links to glioblastoma phenotypes are just beginning to emerge. Systems complexity lies in the tandem SH2 domains of SHP2, which compete for phosphotyrosines on active EGFR with other activators of ERK (SHC1, GAB1), AKT (PIK3R1, PIK3R2), and alternative pathways (PLCG1). The specific aims are to 1) define the key intermolecular interactions in the EGFR signaling network and mechanistically predict the consequences of network adaptations to EGFRvIII expression; 2) map differential EGFR signaling network activation among glioblastoma cells to the methuosis phenotype through a hybrid mechanistic and data-driven computational model; and 3) test model-derived predictions about signaling control of methuosis in vitro and in vivo using new tools to monitor RAS–ERK and AKT activities concurrently and noninvasively. Significance of Project 3 extends past methuosis as a niche phenotype, because RTK–SHP2 signaling at the plasma membrane impacts the response of glioblastomas to DNA-damaging therapeutics.